skip to main | skip to sidebar

This month my post focuses on an episode in the life of Arthur Gliddon and his wife Alistatia after Arthur had been pensioned off by the Victualling Office where he had worked for sometime. First he set up business as a Tobacconist at 30 Tavistock Street. Later he moved his Tobacco shop to King Street, Covent Garden, where he opened up a Cigar Divan at the back of the premises. Anne Gliddon's account of these events can be found in The Gliddons in London, p22. 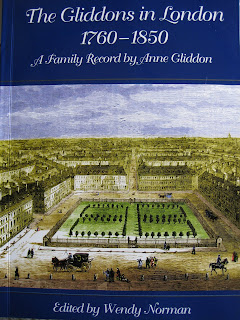 The Cigar Divan was a coffee house. This type of Coffee House first appeared in London in the early 19th century. It was designed to cater for tobacco smokers. (For more information on 17th, 18th, and 19th century coffee houses in London, see Bryant Lillywhite's (1963) reference book London Coffee Houses). 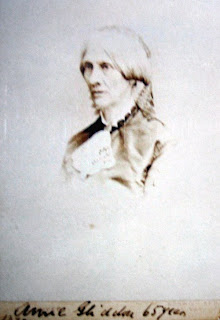 Anne Gliddon (seen right) claims in her Family Record, that it was her Uncle and Aunt - Arthur (b.1788) and Alistatia (b.1790) who opened the first Cigar Divan in London. The idea for this venture had been suggested to them by Alistatia's brother - George Gliddon (b.1793), who had lived in the East for some years.

The day before the Divan's opening, the Gliddons had a party for family and friends to mark the ocassion. Anne, who was eighteen at the time, was also there helping her Aunt with refreshments. Among the guests were the musician, Vincent Novello and his wife Sabilla, and the poet and essayist, Leigh Hunt.
A miniature of Arthur and Alistatia Gliddon,
drawn by Anne Gliddon. 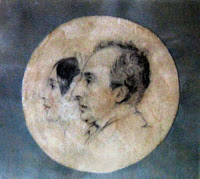 The Gliddon's Divan coffee house turned out to be so successful that it was necessary to hire staff to help run the family business. Then misfortune struck. Arthur and his brother, John Gliddon, (b.1784) - Anne's father - lost their banked savings. This disaster was followed by the death of both Anne's parents a few months later. Arthur at that point, assumed responsibility for his nine nephews and nieces, who were orphaned as a result.
Soon after these events the Divan was taken over by a Mr. Kilpack
By Anne's account it seems that the Gliddons' involvement with the coffee house was short lived. She does not record exactly when or where the Divan opened. Nor is she specific about when the business passed to Mr Kilpack. However, Anne does say that the family was forced through straitened circumstances, to move home in 1827, from Great Queen Street to "compress ourselves into a very small tenement in Crescent Place, Burton Crescent".
Some of the details missing from Anne's account are, however, recorded elsewhere. In "London Coffee Houses" (p.158), Lillywhite reports the existence of a trade-card in the Guildhall Library - which is headed "Tobacco without coffee is like meat without salt". The Card announces the opening of Mr. Gliddon's Cigar Divan, at no.42, King Street, on February 8th, 1825. It also advertises that opening hours were from 10am to 12 midnight, and the annual subscription 30s. Lillywhite notes that MacMichael's History of Charing Cross (1906) makes no mention of the Gliddons running a cigar divan at no. 42, King Street, at that time. Lillywhite concludes that MacMichael could not have been aware of the existence of the trade-card. He adds that Gliddon's Divan was the first of its kind in England, and that it was situated next door to Evans's Hotel, at no. 43,King Street, on the west side. 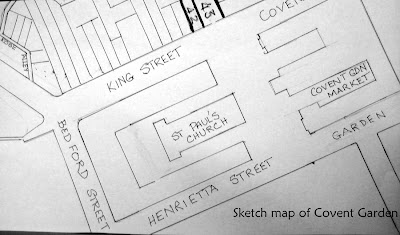 These details are backed up by further evidence to be found in William Hone's "The Everyday Book & Table Book", (1841), Volume 3, pp 674-680. In an article entitled "Mr. Gliddon's Cigar Divan", Hone records his visit to the Divan when it was first opened there. He also locates the Divan next door to Evans's Hotel.
Hone's article includes an illustration of the Divan's interior, together with a description. He judges "Mr. Gliddon's shop" to be "a very respectable one, no one would look for the saloon beyond it. It seems in good oriental keeping, and a proper sesame, when touching a door in the wall, you find yourself in a room like an eastern tent, the drapery festooned around you, and views exhibited on all sides of mosques, minarets, and palaces rising out of the water." 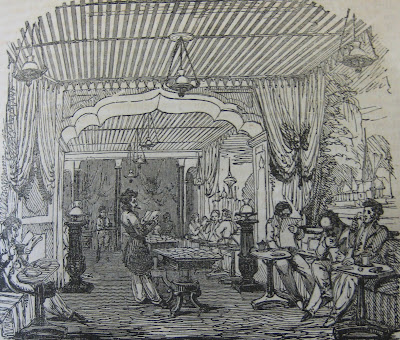 In his essay Coffee Houses and Smoking, Leigh Hunt writes about his friend's coffee house and concludes that "the principal visitors of the divan to be theatre-goers, officers who have learnt to have a cigar on service, men of letters, and men of fortune who have a taste for letters, and can whirl themselves from their own firesides to these. If you are in the city, on business, go for a steak to Dolly's; if midway between City and West End, go to the first clean-looking larder you come to; if a man of fashion, and you must dine in your altitudes, go to the "Clarendon"; but after any of these, man of fashion or not, go if you can, and get your cigar and your cup of coffee at Gliddon's. It is finishing with a grace and a repose."
In piecing together the history of the Divan-type coffee house in England, Anne's personal memories help to make sense of the fragmentary evidence relating to its origins.

Posted by gliddonsinlondon at 3:36 AM